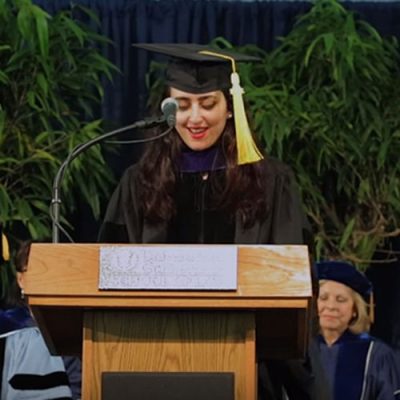 While completing her undergraduate law degree in Iran, Rojia Afshar LLM ’14 discovered the Human Rights Institute at the University of Connecticut and saw an opportunity to broaden her legal education.

Afshar was drawn to the United States because of its history of human rights research and activism, and she found that the U.S. legal system recognized her undergraduate law degree, which was not the case in Europe. In addition, she realized that the diverse curriculum at UConn School of Law would allow her to create a specialized program of study connecting her personal history to the U.S. legal system.

Raised in an intellectual and artistic family that was forced to confront challenges under changing political regimes, Ashfar learned the importance of strength, perseverance and dedication. Through her father, a university professor, she had also learned to value the energy, enthusiasm and curiosity essential to continuous learning. She was looking for an experience that would encourage freedom of thought and decided that UConn’s Human Rights Institute, combined with the diverse legal curriculum offered at UConn School of Law, would provide the ideal path to continue her legal studies.

Afshar chose prison reform as a thesis topic for her LL.M in U.S. Legal Studies, which allowed her to incorporate elements of Persian philosophy with U.S. legal principles into a new approach to reintegrating offenders into society and preventing recidivism. Central to her thesis was the concept of “interuniversalism,” which she described as “the idea that when people know themselves better, they know the universe better and therefore become more effective members of society. It is a process where, through self-exploration, people begin to understand that everyone is a part of the same system.”

Afshar said that one of the things she values most about the United States is that “each person can pick the best from their own history and bring it here to incorporate it in order to cause powerful systemic change for the greater good of society.” She appreciates that she does not have to forgo her own cultural heritage to do this; rather she can draw upon that heritage to broaden and enhance society in the United States. That is a sharp contrast to her experiences in Iran, where those choosing to practice human rights law open themselves up to extensive government monitoring.

After graduation, Afshar passed the New York State Bar Examination. She was offered an opportunity to work at The Hague in human rights but decided instead to move to New York and begin a job search there. As she looks back on her time at UConn School of Law, Afshar says she values the experience and the ability to “take advantage of the diversity in the U.S., to build on the unique cultural aspects that people bring to this country, so that there are no limits to the achievements made possible here.”